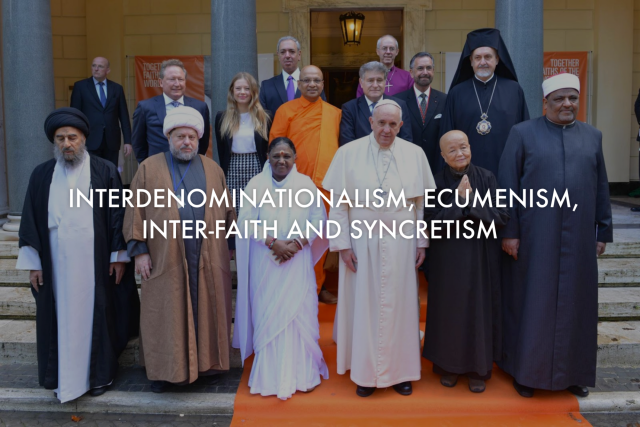 Titus 2:1 “But speak thou the things which become sound doctrine:”

Doctrine, doctrine, doctrine is of the utmost importance to Biblical Christianity, it’s so vital to all New Testament Christian’s. We’re repeatedly told in God’s word to beware of false doctrine, its one of the main reasons we study to shew ourselves approved and to stay steadfastly in the apostles doctrine (2 Timothy 2:15 , Acts 2:42).

Therefore we’re to hold fast to the doctrine which has been delivered to us from the Lord Jesus to the apostles and lastly to the church (the body of Christ) as a lampstand testimony gathering to His name. The following are movements of today which are erroneous and unbiblical looking to bring all faiths together.

Ecumenism
Is the movement which wants to unite all churches and Christians together into one, we shouldn’t have any divisions. It’s a movement for unity. The word Ecumenism comes from the Greek word oikoumenē (“the inhabited world”). The Ecumenism movement rejects the protestant reformation which stands for the separation from Roman Catholicism and the authority of the pope.

Charismatics
Is the belief that the miraculous sign gifts tongues, healing, and offices of apostle and prophet are still with us today and should be experienced by all Christians and churches. This is what charismatics believe, some names who lead this movement are Todd Bentley, Todd White and Kenneth Copeland to name a few.

Inter-faith
Is the belief that all the different religions of the world should come together and cooperate, this includes Muslims, Buddhist, Hindu, Sheiks, Christians etc.

Syncretism
Is the devil’s end goal. Is merging all of the religions of the world into one global religion, think of the coexist movement. 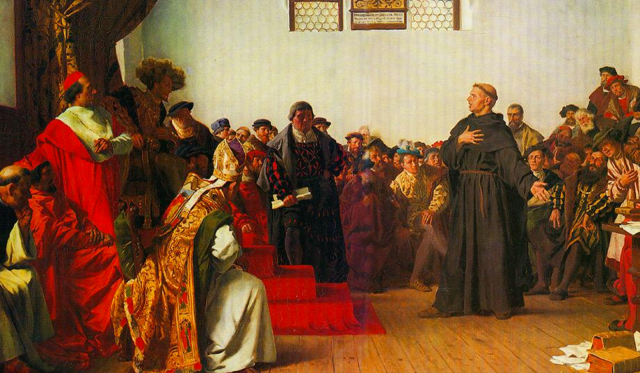 Martin Luther at the Diet of Worms

The Oxford Martyrs were tried for heresy in 1555 and burnt at the stake in Oxford, England, for their religious beliefs and teachings, during the Marian persecution of Protestants in England.

The three martyrs were the Hugh Latimer, Nicholas Ridley and Thomas Cranmer. The 3 did not believe the heresy of the bread and wine of communion really became the body and blood of Christ (transubstantiation) or that Christ’s sacrifice was repeated at every communion. This is a heretical practice of the Roman Catholic Church.

A Recent Experience
Not long ago I was involved with a group of believers we all got along and love the Lord Jesus Christ and profess Him as our Lord and Saviour. We came together to street preach and hand out tracts in hopes of pointing others to Christ with the Gospel. We “came together for the greater good” sounds great right? It sounds wonderful on the surface but there are issues which comes along with this.

First I’ll say it’s wonderful going out with other believers and preaching, the Lord knows how much I enjoy it, still, there needs to be exercised caution when doing so. I began seeing contradictions which didn’t go with scripture I’ll explain.

Acts 2:46 “And they, continuing daily with one accord in the temple, and breaking bread from house to house, did eat their meat with gladness and singleness of heart,”

An Illustration
To illustrate let’s create a scenario, I’ve been asked before “what denomination am I?” My reply is “my assembly gathers to the name of the Lord Jesus Christ, no denomination”, we’re simply believers who follow the Lord Jesus.

That said, let’s say the word gets out around town that my assembly is doing great things, we’re following scriptural teachings and ministering the word. For the sake of this illustration let’s say the Methodist church a few blocks away hears of all the great things done.

The Methodist come to us and say they love what we’re doing and would like to come together, we’ll have a larger attendance and greater chance of spreading the word of God. And we agree and now my assembly and the Methodist “come together for the greater good” and someone gets saved they now believe in the Lord Jesus and this person comes and ask what do I do now? And we say you need to get baptized that’s what the Bible teaches. And they ask the Methodist the same question about getting baptized and the Methodist tells em you don’t need to do that you were baptized as a baby, infant baptism. Now, we have confusion, false doctrine. Baby baptism is unbiblical and not taught in the Bible. 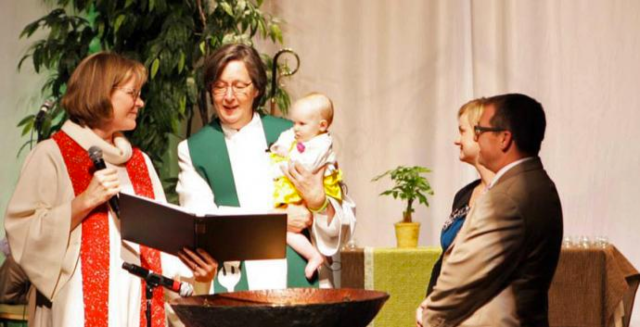 From the earliest times, children and infants were baptized and included in the church. As scriptural authority for this ancient tradition, some scholars cite Jesus’ words, “Let the little children come to me…for it is to such as these that the kingdom of God belongs” (Mark 10:14). However, a more consistent argument is that baptism, as a means of grace, signifies God’s initiative in the process of salvation. John Wesley preached “prevenient grace,” the grace that works in our lives before we are aware of it, bringing us to faith. The baptism of children and their inclusion in the church before they can respond with their own confirmation of faith is a vivid and compelling witness to prevenient grace. — United Methodist Church

The Dilemma
As I associated with this group I saw many scriptural contradictions in Biblical doctrine. We’ve had discussions on the doctrine of baptism, most of us believing in baptism but others thought it not necessary. Their reasoning was if a person is indwelt by the Holy Spirit then it’s not necessary to be water baptized. False doctrine was introduced and overlooked no one wanted to make sure the doctrine of baptism was clear.

During Bible studies we had sisters wanting to speak and teach during meetings, not practising head coverings, dressing immodestly etc. We even had people attending giving word and it was questionable they were saved. That’s not for me to decide God knows if they are. During this time I felt strong convictions about these issues. They’ve been discussed as I brought up some of these issues and one or two others as well, but they were overlooked again.

The last bit which made me not continuing with them was a sister mentioned she wanted to conduct communion at work with another woman. I pointed out it was unbiblical and not something to take lightly, there’s scripture which speaks on this (1 Corinthians 11:29). She wasn’t eager to hear this as others encouraged her, therefore, she became upset and thought I was condemning her. I said I can’t condemn anyone, I’m simply showing you so that you’re in err.

Sister’s in the Lord are not to be in leadership roles, the word of God makes it clear leadership roles are specifically reserved for men (1 Timothy 2:11–14, 1 Corinthians 14:34–37). Some either were unaware or ignored these biblical truths and it’s our responsibility to bring them to others attention.

Ecumenism and its Origins
Where did Ecumenism/Interdenominational come from? Ecumenism is an attempt for the Roman Catholic church to gain control. It’s worth mentioning that Catholicism and Christianity are not the same, Catholics are not Christian. The Bible never mentions the word Catholicism or Catholic, the Roman Catholic church would like to believe that the apostle Peter was the “first pope” again this is false doctrine. Catholic’s often quote the passage of Peter’s confession from (Matthew 16:18), while that verse in its context never mentions anything about Roman Catholicism it does speak to Jesus Christ and the Church which is His body. That was a hidden mystery which the Lord Jesus was revealing for the first time, the church.

The Catholic church at the time of the Roman Empire seized control of the scriptures. The Catholic church held to the belief that none besides the pope and clergy were allowed to read and interpret the scriptures. They held the pope as being the final and highest authority over scripture. But men of faith who paved the way for us, who held to Sola Scriptura, took the Holy Scriptures and translated them into our own languages should be remembered men like Martin Luther and William Tyndale.

I defy the Pope and all his laws; If God spare my life, ere many years I will cause a boy that driveth the plough, shall know more of the Scripture than thou doust. — William Tyndale

Ecumenism is an attempt by the Vatican to seize control and in the process to unite all of the world’s religions under one banner. Does this sound familiar it should?! It’s mentioned in Revelation when it speaks of BABYLON THE MOTHER OF HARLOTS and the false prophet. The Coexist movement is an ungodly movement geared towards the merging of all the religions to be under the pope as the one world religion. And leading evangelicals like Rick Warren are in fellowship with the pope. 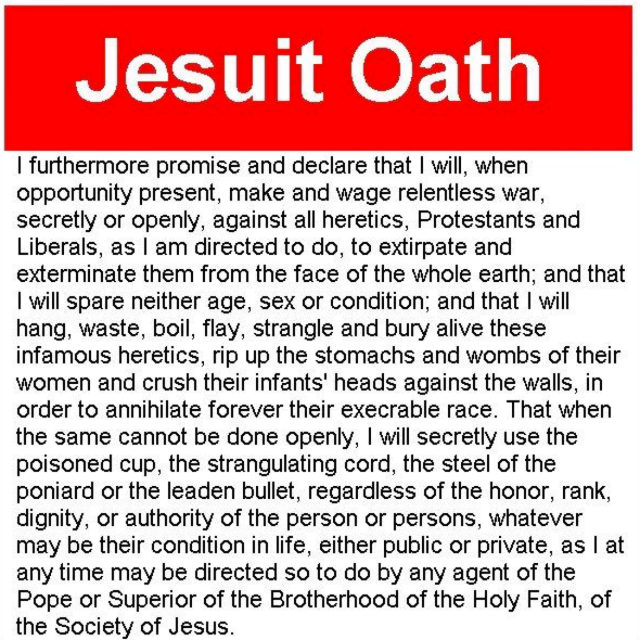 The Extreme Oath of the Jesuits

The Extreme Oath of the Jesuits
It becomes clearer now that “coming together for the greater good” is not a wise idea when we ignore important doctrinal truths in order to have fellowship. In Christendom, problems would arise if we pool multiple denominations together because while each one is a Christian denomination they all have different foundational beliefs. We shouldn’t have divisions amongst us first and foremost (1 Corinthians 1:10–1:13) but when we gather to anything but the name of Jesus that’s what happens division.

From the small list above we have contradictions, if grouped together there would be confusion about salvation, baptism and sexuality and that’s only a small list of beliefs which contradicts each other. This is ecumenism on a small scale just between Christian denominations, if we factor in Mormons, Jehovah Witnesses, Buddhist, Hindu and Muslim beliefs we spiral down even faster. As followers of Jesus Christ, we are to remain separate from other beliefs (2 Corinthians 6:17). That would be a different gospel altogether.

True Fellowship
Is based upon the fact when a group of Christians come together and have the same doctrinal truths based on scripture, not on man, doctrine regulates fellowship. Fellowship is not something we agree to have it’s something we have because we agree. Continuing steadfastly in the Apostles doctrine (Acts 2:42). 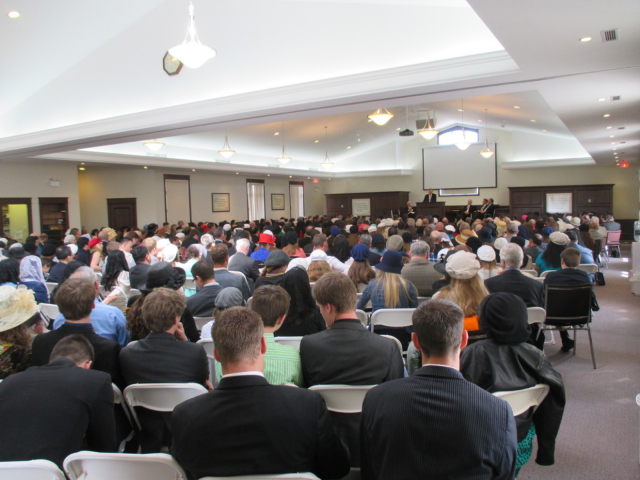 Just sharing a recent learning during my walk with the Lord as a learning for us. Maybe you’ve also experienced the same and if so feel free to comment on your experience. Let’s us learn from these mistakes and continue to press forward into the kingdom. Thank you for reading. Grace be with you, mercy, and peace, from God the Father, and from the Lord Jesus Christ.