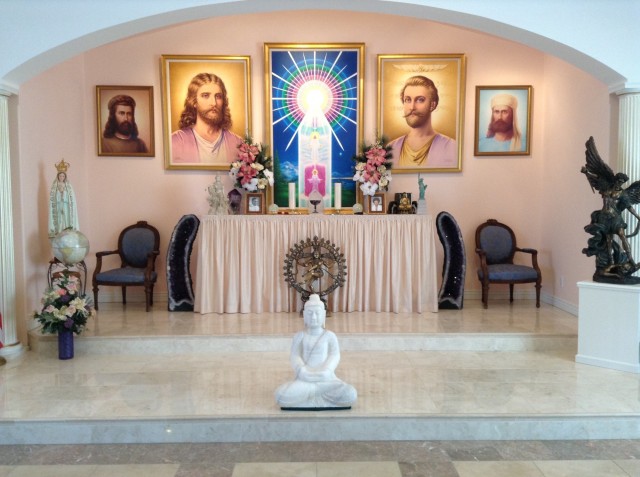 1 John 4:1 “Beloved, believe not every spirit, but try the spirits whether they are of God: because many false prophets are gone out into the world.”

This New Age group contorts Christian scriptures as well as mixing it with teachings of world religions such as Buddhism, Iranian “prophets”, Catholicism, Ancient Wisdom etc. The teachings of this cult are dangerous and strange indeed along with their main teaching “Ascended Masters”.

What are the teachings of the Ascended Masters?

They (CUT) believe that the “ascended masters help us become aware of the Paths back to the Source”. They believe that there’s more than one path to what they call “Christ consciousness” which comes from an white light. This reminds me of a verse in the bible which states:

2 Corinthians 11:14 “And no marvel; for Satan himself is transformed into an angel of light.”

Satan has deceived these people disguising himself as “white light”. These “paths” consist of seven rays leading to their god. It’s definitely not the One true God of the bible.

Here’s a quote directly from them.

To be a chohan on one of the seven rays means that this master defines the law on that ray; through him that energy of the Christ and of God flows to mankind, to all who are evolving on that particular path. — Church Universal and Triumphant

According to Summit Light House there’s 7 “chohan” or the ascended masters of these 7 rays.

Paul the apostle when writing to the Corinthian church warned them of a false Christ, spirit or gospel. It’s possible for people to be deceived in believing a counterfeit Christ who didn’t say “He’s the way”.

He also mentions to the church in Galatia that if an angel or anyone else brings another gospel because there can only be one gospel let them be accursed.

Galatians 1:8 “But though we, or an angel from heaven, preach any other gospel unto you than that which we have preached unto you, let him be accursed.”

Elizabeth Clare Prophet prophesied that the United States would suffer a nuclear attack. Elizabeth and her faithful followers decided to labour for 18 months, building an enormous underground bunker from metal tubes. When the prophecy didn’t come true they lost a lot of their members. There isn’t any need for prophets today as we have all that God wanted to reveal through His word. In checking what The Church Universal and Triumphant falsely prophesied, shows they meet the standards of a false prophet. False prophets are condemned in the Scriptures and we are told to reject them. The Bible has a test in dealing with someone who comes in the name of a prophet.

Deuteronomy 18:22 “When a prophet speaketh in the name of the LORD, if the thing follow not, nor come to pass, that is the thing which the LORD hath not spoken, but the prophet hath spoken it presumptuously: thou shalt not be afraid of him.”

What are their Basic Doctrines?

Does the Church Universal and Triumphant’s doctrine line up with the Bible? That’s the question we’re looking to answer.

Church Universal and Triumphant believe: that there is in each person a higher self and a lower self. The higher self is unchanging, connected to all matter, space, and time. The physical body is the lower changing self. This dual nature reflects the duality of God.

What does the Bible say? God created man in His image but shortly after we’re not exactly how long but man sinned in the garden and death came upon all men, so that all have sinned and fall short of the glory of God. We do have a soul but we do not have a “higher self” we’re sinners who by the grace of God are able to escape the wrath of God by trusting in His Son the Lord Jesus Christ of the Bible.

Genesis 1:26 “And God said, Let us make man in our image, after our likeness: and let them have dominion over the fish of the sea, and over the fowl of the air, and over the cattle, and over all the earth, and over every creeping thing that creepeth upon the earth.”

Genesis 2:7 “And the LORD God formed man of the dust of the ground, and breathed into his nostrils the breath of life; and man became a living soul.”

Romans 3:23 “For all have sinned, and come short of the glory of God;”

Church Universal and Triumphant believes: that the power of the higher self cannot be transferred to the lower self until the individual has achieved worthiness. This process takes place through multiple lifetimes during reincarnation. Through reincarnation (literally, to come to life again) one may experience multiple rebirths until their soul reaches a state of perfection and becomes one with the Universal Soul or “God.”

What does the Bible say? God in His word warns us that our life is nothing but a vapour which appears for a while and then vanishes away. That we’re as the flower of the field which fades away.

Hebrews 9:27 “And as it is appointed unto men once to die, but after this the judgment:”

James 4:14 “Whereas ye know not what shall be on the morrow. For what is your life? It is even a vapour, that appeareth for a little time, and then vanisheth away.”

1 Peter 1:24 “For all flesh is as grass, and all the glory of man as the flower of grass. The grass withereth, and the flower thereof falleth away:”

Karma is one of the many beliefs of Church Universal and Triumphant. A person has more than one life and accumulates “debt” depending on the good or bad committed in that person’s life. Storing up bad Karma leads to being reincarnated in an undesirable form. While good Karma and good deeds provide a desirable reincarnation. All of the “Ascended Masters” attained this end goal according to CUT that goal being perfection and union with “God” the Divine Consciousness.

What does the Bible say? We only get one life, we don’t get “do over’s” God has given us one life to get right with Him. There’s no such thing as “reincarnation” the concept of coming back as something else is a Hindu belief. The book of Hebrews in the Bible puts it this way.

Hebrews 9:27 “And as it is appointed unto men once to die, but after this the judgment:”

No coming back as a dog or frog or anything else. One chance at life and once this life is done then you’ll stand before God in judgement to answer for all the good or evil you’ve done.

Church Universal and Triumphant teach the principle of “I AM” command. They believe when an individual makes a statement such as “I AM successful” it is believed they are summoning the “God” or their higher selves thus making it come true.

What does the Bible say? Only GOD can use this divine name for Himself, no created being can use this, for one to do so would be utter blasphemy. God alone is the self-existing one.

Exodus 3:14 “And God said unto Moses, I AM THAT I AM: and he said, Thus shalt thou say unto the children of Israel, I AM hath sent me unto you.”

Therefore we must reject these nonsensical teachings which prove how far gone the members of this cult are to believe something so blasphemous.

What do they believe about Jesus Christ?

They (CUT) believe that Jesus Christ is one of many Ascended Masters. They claim the Bible does not contain all of Jesus’s teachings saying much of his teachings have been lost and must be revealed to followers of the Ascended Masters. They also teach that Jesus reached the age of thirty, He had reached perfection and merged with the Real Self in the Christ. Thereby accelerating to the level of “I AM” the Eternal Presence.

They do not believe in the true God of the Bible as it’s clearly seen here, reading God’s own words He says:

Matthew 24:35 35 Heaven and earth shall pass away, but my words shall not pass away.

Luke 21:33 33 Heaven and earth shall pass away: but my words shall not pass away.

God promises His word will never pass away meanwhile CUT says the Lord Jesus “teachings have been lost”. Clearly, only one is telling the truth and its not Church Universal and Triumphant. What these cults aim to do is control by means of saying all important “teachings have been lost” and you need is to help you find that truth. These cult leaders have a false truth because there’s no light in them.

1 John 1:5, 6 This then is the message which we have heard of him, and declare unto you, that God is light, and in him is no darkness at all. If we say that we have fellowship with him, and walk in darkness, we lie, and do not the truth:

Not to mention the most obvious observation is that the place is littered with idolatry. Statues of Mary, Buddha, Ishtar and angels all things which are condemned in the scriptures.

This place is not of God and I would warn anyone to steer clear of this new age cult which is masquerading as a church. It’s most certainly a cult and will have to give account to God one day. We should pray for those who have fallen for the deception that they would wake up and leave this cult. Jesus Christ is the only truth, we don’t need anyone else He (Jesus) said: